I had a good day ruined by one of the Butcher Babies, after seeing them play.

I spent the afternoon with my niece, who is nearing her second birthday, and in a rare burst of sunshine and warmth we went to the play park. She had great fun, and in the visitor centre she finally found the courage (with my reassurance) to climb for the first time through the dark tunnel with their mocked-up badger sett. Previously she has been too scared. My work as Best Uncle continues.

Back in town, I followed my plan to see the Butcher Babies, whose debut album has had a fair number of plays on my stereo since the band were recommended to me – a year or so ago. The opening band were local, with a good press, and I have been trying to see them live for some time. Tonight, at last, was to be the night. 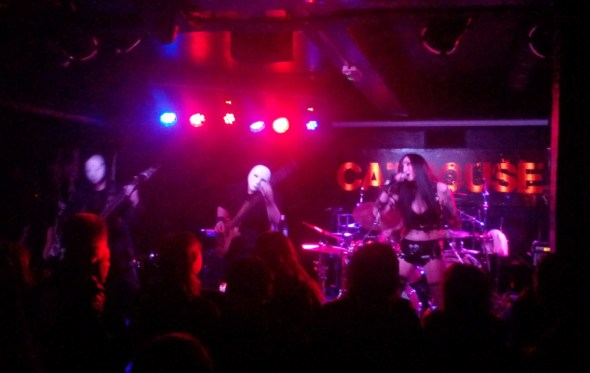 Above: Splintered Halo. Four of them wear masks and one wears very little indeed.

Sure enough, Splintered Halo drew a decent crowd of their own, and quickly won over the early-comers who were new to them. In sixteen years of local gig attendance, I have rarely seen a band so focused, so tight, with such a clear identity and character-driven lyrics and performance. With an EP out and an album in progress, and on the back of the show I saw this evening, their star may be about to rise – nationally, and perhaps internationally too.

The second (and main) support was a band called Sumo Cyco – the best and most interesting unknown (to me) metal band I have heard in years, and I write that as someone who has seen hundreds of bands and listened to thousands. With a hardcore energy, infectious enthusiasm, and a frontwoman both vocally adept and unafraid to jump in amongst the crowd, they electrified the gig. At the merch booth, cheerful guitarist Matt initiated conversation, on account of the KMFDM shirt I was wearing, and we both hail from Hamilton – me from the nearby Scottish town, and them from its Canadian namesake. Although fifteen pounds is expensive for a CD these days, I happily bought a copy of their album. Next time they play, I will be there.

Above: Sumo Cyco. Singer Skye had removed her captain’s hat but was dressed to speed a bonnie boat over the sea.

Butcher Babies were impressive, an excellent headline band with two talented female singers. There is Heidi, a blonde with vivid red in her hair – she seems lovely and friendly. Outside the venue, I saw her walking from the tour bus and said “Good show,” in passing, and she grabbed my hand and quickly shook it with a warm smile and a ‘thank you’ on her way back into the building.

Their other singer, Carla, is a total cow with a bad attitude problem, as I learned to my cost just prior to seeing Heidi.

I was walking down the stairs that lead to the front door/exit of the Cathouse, heading home. At the very moment I reached the half-open door, on my way out, Carla stepped inside. I said “Good show,” and she asked “Could you do me a favour?”

I immediately thought (in hindsight, my error) that she had mistaken me for a bouncer – at the doorway into the building – because it happens to me all the time. In my boots, I stand six foot four. I have broad shoulders, weigh about twenty stones, and have a natural resting facial expression which seems to sit somewhere in the vicinity of disapproving, unamused, unimpressed, or whatever other qualities immediately suggest ‘bouncer’ to people in clubs, at gigs, and once at a bus stop. It had already happened earlier that very evening, in the crowd, while she was on stage. 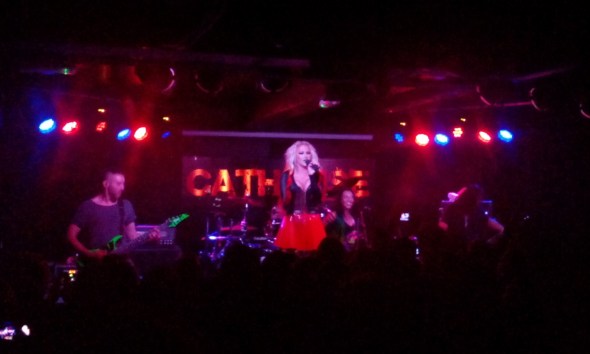 Above: Butcher Babies, with Heidi centre stage and Carla behind her on the right.

Fans of comedian Kevin Bridges will relate to his description of the awkward moment in a shop, when someone mistakes you for a salesperson and you have to embarrassedly say “I don’t actually work here.” That was what I said, or began to express, in response to being asked for a favour – attempting to make clear that I was willing to grant this favour, provided Carla realised I was not staff at the club. Instead, she unleashed an unwarranted torrent of Fuck Yous and You Fucking Assholes at me, which caught me completely off-guard and led to me trying to further explain while her inexplicably angry outburst continued. It takes a lot to unsettle me, but she managed. She wanted a photo taken, of her and the mural on the wall of the staircase, and as that became clear I offered to take it – too late, as an unbelievably simple misunderstanding descended into complete verbal abuse. I was too taken aback to even retaliate, or to commiserate with the actual bouncer after the fact. I simply went home, shocked and becoming increasingly annoyed at how much of an unnecessary cunt she had been. 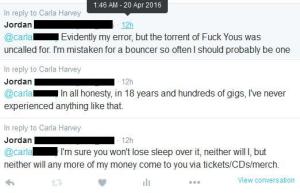 Above: Carla responded to me on Twitter, something like “I knew you weren’t a bouncer, but I asked you to take a photo and you said no, so I said fuck you :-)” – not shown as she deleted her tweet once I replied to it and before I screengrabbed it.

It is an interesting tactic, in this era of illegal downloads and general apathy, to round on somebody who has paid to see you just for seemingly refusing to take your photo. Presumably the aim of this thirteen-date UK tour was to build on their fanbase, not undermine it. However, I have seen bands who can manage to actually sell out the Cathouse, and bigger venues, and never have I witnessed anything like what happened tonight – let alone been subjected to it. Next time they play here they will sell one less ticket.

Last week, I flew to Los Angeles to see my favourite band play a unique and sold-out show. We have been friends for eleven years, I was thanked from the stage, backstage we drank together – following welcoming hugs – and we laughed and chatted and caught up until the bar was closed. We will do it again next time too. So the question is, if I have in my life bands who truly appreciate my support, why the fuck do I need Butcher Babies?

Update: It turned out to be mutual, as I was swiftly blocked on Twitter when I posted and linked to this blog. Admittedly, tagging her and referring to her as a “total cunt” probably escalated the situation – I suspect that is why her borderline-civil tweet was replaced with an inaccurate but all-out offensive, as demonstrated by the following.

One of my friends took it upon himself to ask her about it, receiving the reply below, after which he was instantly blocked too – hardly the actions of an innocent. Carla seems very fast to dish out unjustified criticism, and unable to take it. Without wishing to give any weight to her reply, there are two things here. Firstly, it’s hard to imagine that a Glasgow bouncer was interested enough to volunteer an opinion about an interaction between a sober punter in good humour (until increasingly bewildered by unfolding events) on his way out of the club, and a diva who had just headlined a show there. It might have been different had I hung around arguing, invoking the wrath of city centre nightclub door staff, but I just left.

Furthermore, if I was a bouncer, and one of the headline band looked to me and said of someone, “What a cunt,” I would probably agree too just to end the conversation – if he did agree, which I cannot know. Frankly, I do not know anyone who can be bothered entering, or looking for, drama – except, perhaps, an image-based LA band such as Butcher Babies. 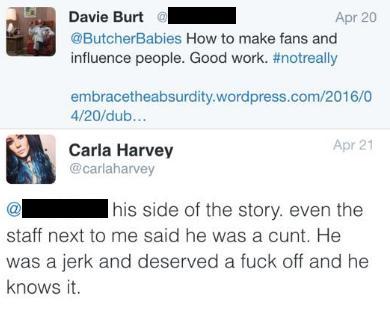 This is now stalemate, and in the undesired territory of tedious online drama. For my own amusement, I wanted to employ caustic wit to try and get myself banned from their Facebook page too – but to do so would be to lose whatever high ground I might have. With 270,000 followers on their page it is hard to imagine any of the band will care very much, especially not as I have already been dismissed as “a jerk.” Rather than waste any more time on this, I would sooner go and chat with musicians who have less chips on their shoulder and more in the way of a sense of humour.

Update 2: Blocked again. You cannot reason with the thoroughly unreasonable. Game over. And you know what? I sincerely regret going to that gig. I want to be uplifted, I want to smile. I do not spend my time and money on supporting live music in order to offend the band members on my way out the door, and I wish I had never met that sour and twisted poisonous arsehole. She is a fucking snake. 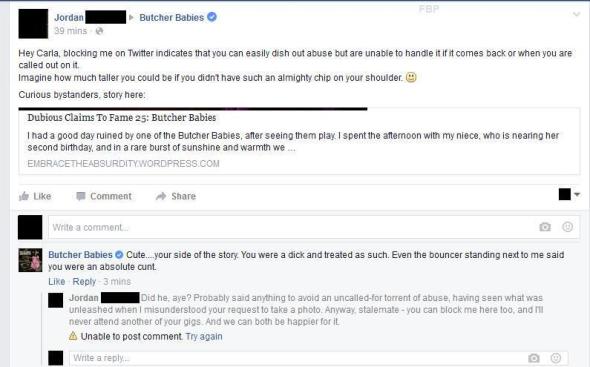