Diary Of An Anti-Tory Protestor – Part 1

There comes a point in every man’s life – or, at least, I hope there does – when you realise that clicking “like” on shared Facebook photos and statuses is not an adequate or forceful form of protest. My own study of history leads me to believe that women received the vote as much for the roles they fulfilled during the First World War as for their widely-known protest movement. Yet, it is is hard to believe that Emmeline Pankhurst would have been quite so powerful and historically renowned a figure had her cohorts not chained themselves to the railings of Downing Street and instead merely hashtagged #Suffrage on Twitter. On Twitter, due to the limitations of hashtags involving punctuation, it is not even possible to accurately tag it #Women’sSuffrage.

I was aware, through Facebook, of an actual physical protest being held in my city on Saturday 30th March. This was the end of the week in which, as previously documented here, I had sent out a Tweet requesting that someone hit That Cunt Cameron in the face with a shovel, which was subsequently retweeted by an MSP. It was reported in the Daily Record, and then raised at First Minister’s Questions in the Scottish Parliament. My involvement, the reasons for my tweet, and the sentiment behind it were not discussed, and the full (lack of) reaction can be read in the follow-up post here. It seems that I had violently and abusively summed up the consensus of growing public opinion.

I can’t remember how the protest first came to my attention, although due to the political motivations of several of my friends and mutual friends, it began appearing on my pages with some regularity. I have since joined the Anti Bedroom Tax Protest In Scotland page, and have long been a follower of the “The last person to enter parliament with honest intentions was Guy Fawkes” page.

Last summer, I had bought a couple of Scottish flags, saltire crosses upon the centre of which I stencilled the logo of my favourite band. One of them ended up on stage with them at their Glasgow gig, held aloft during their encore at The Arches to loud cheers. I had planned to do something similar for another band I was seeing in Berlin at Christmas, but never got round to it. With this “spare” flag still in a drawer, I looked it out and wrote “F_CK THE TORIES” across the middle of it. While the back of my shirt has the same phrase uncensored, it occurred to me that self-censoring the first word would make it more publication friendly, should any photographers or cameramen happen to record it. The message is still unmistakeable, and I deliberately used an underscore in place of the “U” so that, if I decide to, I can fill it in later. The task, which I had started when I got in from a late-night comedy show, was finished by about 5am. I slept a few hours, and then dragged myself out of bed and down into the town.

I knew a few people who had said they were going, and another couple of dozen who had clicked “attending” on the facebook page with no real intention of showing up. One of the former, my friend Matt, was also attending his first ever protest, and I had provisionally arranged to meet him. The overall plan was to assemble at the Green, march to George Square, and rally there. I was running a little late, thanks to the company who – due to the frequency with which they announce it – may be known to the uninitiated as “Scotrail Apologise.” This same company is better known to users of social media as “Fuck Scotrail.” Thanks to their sterling inability to run trains to anything even approaching the timetable they set, I made it to the Bridgegate just as the march set off. Matt was, he texted me, next to a large black Scrap Trident banner, and I stood on the corner of the street until I spotted it. This being a protest march and not an orange walk, it was very easy to infiltrate the ranks to cross the marchers and join him.

It fair fills you with civic pride to march alongside hundreds – thousands – of others who all care passionately about the same thing. Especially when you know you are in the right. This “Bedroom Tax”, to use the accepted colloquial term, is completely unworkable. The government are demanding people downsize into homes that just do not exist – it has been widely reported that there are tens of thousands of people who are now required to move into a couple of thousand homes. The housing needed – affordable single-bedroom homes – is not physically available in anything even approaching the numbers necessary. Those affected, therefore, will have to make up the resulting shortfall in their rent, on the back of this cut, and if they can’t keep up payments they will face eviction. On the face of it, this does not affect me. I live in a one-bedroom flat. However, on the back of all the other ill-thought-out strategies – involving Workfare, ATOS, the NHS in England, funding for Trident – and the general hypocrisy of Tory rulers who are, largely, millionaires and have little or no idea what life is like on the breadline – I have had enough. This party has one MP in Scotland. One. That is not a mandate to rule, and when That Cunt Cameron installed himself as the Prime Minister I immediately wrote “Fuck The Tories” across the back of a shirt, in the DIY protest spirit of the original punk movement.

With growing anger, I have watched as the Tories have systematically undermined the entirety of the welfare state – rights that were hard fought for by our recent ancestors. On the back of my infamous tweet, mentioned in the blog already linked to, and the general apathy with which it was mostly met, I realised that it is time to protest in a more visible form. I don’t mean, and am not advocating, masks and molotov cocktails, but just being on the streets and marching and swelling the ranks by the number of one. It is my belief that people are taking to the streets to protest the Bedroom Tax, because if they don’t then inordinate numbers of people will be forced to LIVE on the streets. That’s when homelessness increases, and then crime increases, while businesses fold as people divert disposable income into living expenses. It’s time to stand and fight.

This is how I came to find myself in the midst of three thousand people, wearing a shirt and holding aloft a flag that both state my view clearly – Fuck The Tories. I didn’t join in with any chants, partly from being self-conscious, and largely because everything I wanted to say was clearly written upon my person.

To my mind, this is the part in the film “Network” where he says “I want you to get up right now, go to the window, open it, stick your head out and yell ‘I’m as mad as hell, and I’m not going to take this any more!’ I want you to get mad!”

I want you to get mad. This affects us all, directly or indirectly. You don’t have to support the SNP or want independence to realise that this whole Bedroom Tax fiasco is unjust and totally unworkable.

When we got to the Square, I bumped into or met up with another few friends. My friend McGovern is no stranger to socialism and protest marches, and he joined us to listen to the various speakers being introduced by comedian Janey Godley. I found the pair of us in one of the photographs that was circulated online after the event. 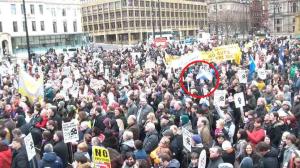 At least four people took pictures of the back of my shirt – they got my best side – and three of them had the courtesy to ask first. When I went home afterwards, I stopped at a local shop to pick up some messages. A wee woman came up to me from behind and said “Do we just add a tick if we agree?”

Like I said, the feeling is widespread. If you feel that passionately, then do something. Make yourself heard. Stand up for what you believe to be right. Stand up for those who can’t stand up for themselves. Today, for the first time in my life, I realised that I feel prepared to lock arms with people and prevent evictions, if it comes to it. I’ve had enough.

I’m as mad as hell, and I’m not going to take this any more.